In order to be featured on Russian search engines, it is necessary that your website is localized in Russian, either partially or entirely. Russian website localization refers to the process of conducting Russian keyword analyses, implementing Russian SEO, and integrating the localized Russian pages onto your website so that you can have eligibility to rank on Russian search engines.

Contract our Russian experts to create an entry page, multiple pages, or a full-website translation in Russian for your website optimized with your Russian keywords/meta tags. 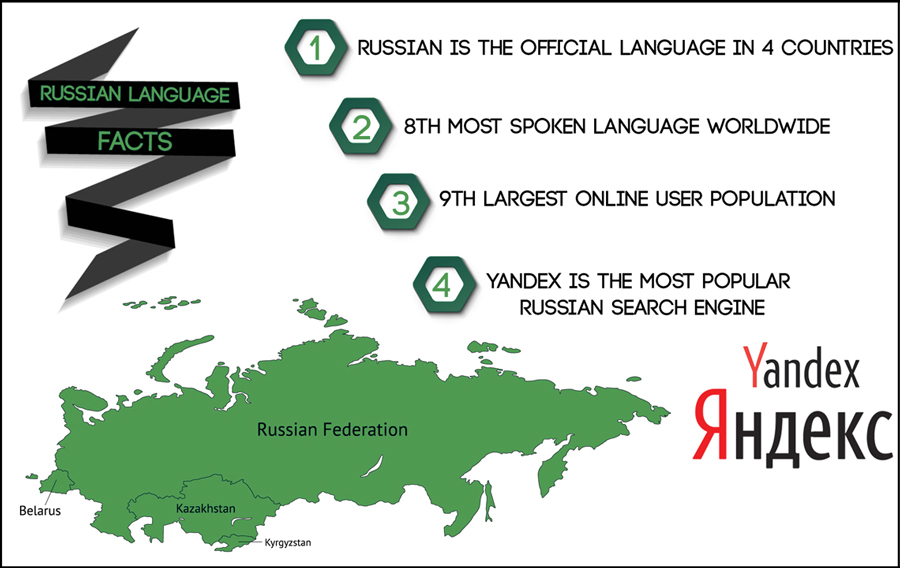 Russia and the Russian native speaking population are also becoming more and more active in business affairs on a day-to-day basis. In fact, today, more than 60 million people worldwide access the Internet in Russian. It is clear that having a position on the international markets means having a presence on the Russian market as well.

Russian belongs to the family of Indo-European languages. Within the Slavic branch, Russian is one of three living members of the East Slavic group, the other two being Belarusian and Ukrainian. Considered to be one of the world’s most important languages, Russian is the third most commonly spoken European language in the world after Spanish and English.

As the official language in 4 countries, there are over 277 million people speak it as a native language in countries around the world, but it is spoken primarily in Russia and countries that once belonged to the Soviet Union. Within the United States alone, there are over 881,000 Russian-speaking individuals. It is often taught as a second language in many of the Eastern and Central European countries as well. Russian is one of the official languages of the United Nations and has similarities with the other languages of neighboring Eastern European countries.

The Russian language is broken up into three major regional accents but all Russian native-speakers understand the traditional form of Russian. The primary country where Russian is spoken is Russia. This powerful nation has long held an important role in international affairs with contributions to world growth in subjects such as art, technology, education, industrial, etc. Today, Russia continues to hold an important position with the United Nations, with an educated population, stable government and abundance of natural resources.